Over the winter we had the privilege to redesign and develop a custom Wordpress site for Crossroads church & Pastor Daniel Fusco. We re-evaluated what we had done for them the year previously with the new challenge of accommodating a theme for their children campuses on a WP MultiSite.

A crossing of roads

We previously began work for the church led by Pastor Daniel Fusco at the end of 2015 when we were contracted to design and build their site within wordpress. The site was designed for a single church, with a singular location, with events and ministries tied to that one location. So a year later when Crossroads Community Church took ground in Portland, OR the sister city to their location in Vancouver, WA they knew they would have to rethink how they did web. Enter Salt Agency.

We all find ourselves at times at an intersection of paths in a literal and philosophical sense and Crossroads Community Church had come to their own.

We designed and developed wordpress site for Crossroads Community Church and their Pastor Daniel Fusco. You can check out the sites by clicking the links below.

We love return clients. When a work relationship becomes more of a relationship with work mixed in. Most can attest that the biggest hinderance to the start of any project are the two entities, in this case, the creative agency and the client, learning to speak the same language. You have two cultures, two tribes coming together for a common purpose, so communication is vital. To one entity a “wireframe” could be a flowchart of views to another it could be a napkin sketch of where components would go on a page. So crafting this new “trader tongue” between the two is vital, but if you already speak the same language, well then we can jump straight to the fun.

It was late november when Jason their Creative Pastor reached out to me that they needed to knock out a site for their Pastor Daniel Fusco in only two weeks. He had a new radio and TV program going out and they needed a new site that would look good and was easy to update that they could point the audience toward. Challenge accepted.

It was simple enough, a phone call and email of exactly how they needed the site to function was all was needed and we got to designing. 2 week deadline isn’t a huge amount of time, so it’s always one of those hard lines of feeling like there is more that could be done and refined, but there just wasn’t the time. We took to sketch, knocked out some concepts, got them approved and boom, we were in development. 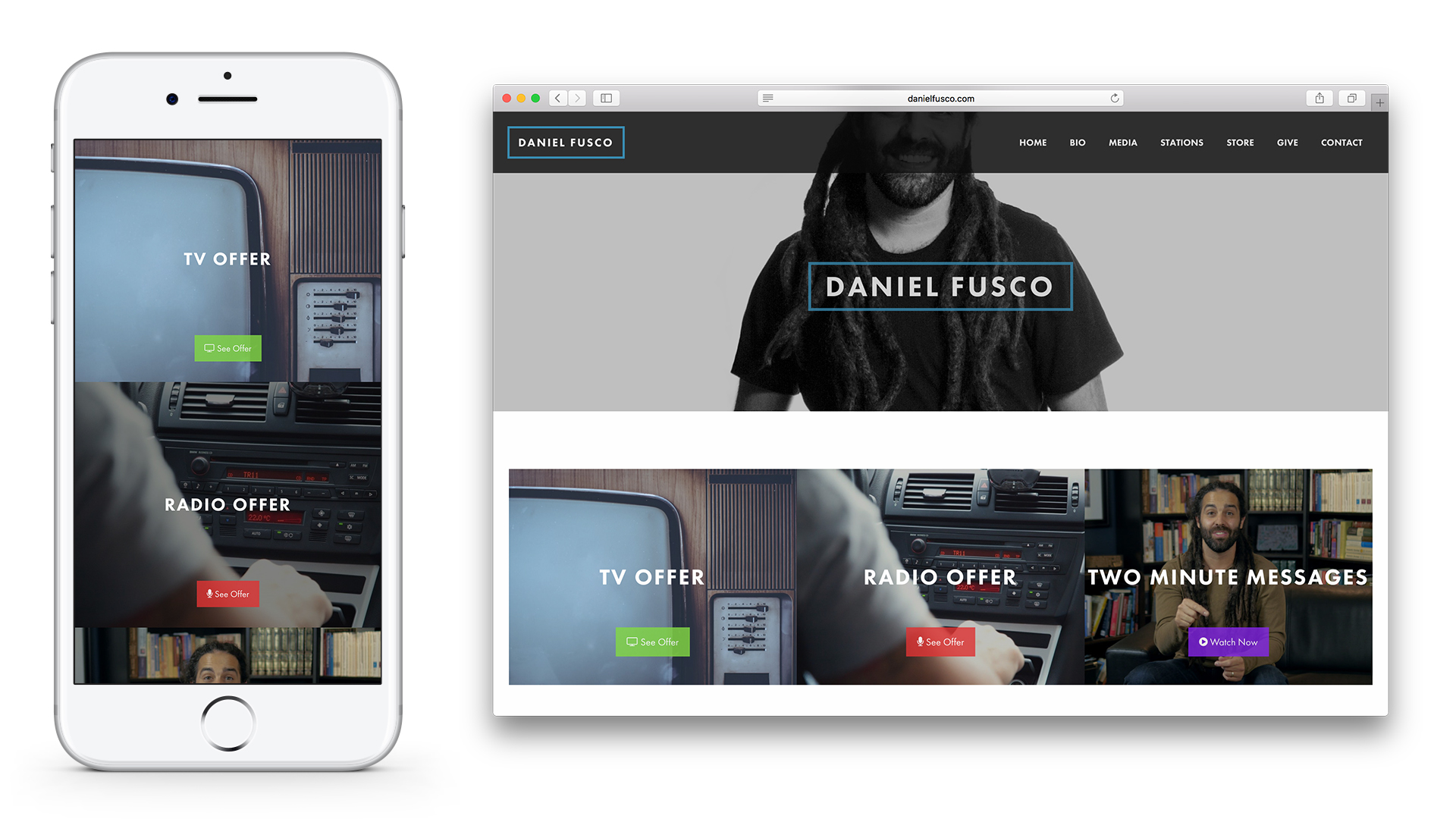 Before we design we must redefine

There is nothing like being on the home stretch of a rush project. It’s consumed so much of your thoughts and time, and you see the sun over the ledge like the perverbial Gandalf running down to bring victory to the ensuing battle. But you don’t anticipate for that project, before it even to have finished to run straight into another, “We need this now” type of project.

An existing church in Portland, OR was soon to become a secondary location for Crossroads Community Church based out of Vancouver, WA. We typically call churches with multiple locations as multi-site churches, with the Portland and Vancouver location being separate campuses belonging to one overall church body. So if you had previously built a site to target one campus, which then embodied the entirety of the church, but had to separate parts of the global Crossroads Community Church from separate locations it easy to see where problems would arise. So we had to go through and redefine exactly what a web presence met for Crossroads.

We got to brainstorm with the Crossroads team on what exactly belonged to each campus uniquely, such as events, ministries, and staff, and what belonged to the global entity of the church, such as targeting new visitors, media pages, and giving.

Once we had that clearly defined we were able to create a well functioning flow of navigation and design that we could begin to develop. Taking users from Crossroads Church as a whole and allowing the user to drill down deeper to learn more about each individual campus, and how they could get involved. In order to do this easily for the team we created two separate themes, one for Crossroads as a whole, and a separate theme that campuses could use. With a a few plugins and enabling Wordpress Multi-Site we gave them the ability to have a site that can grow, as their church does. 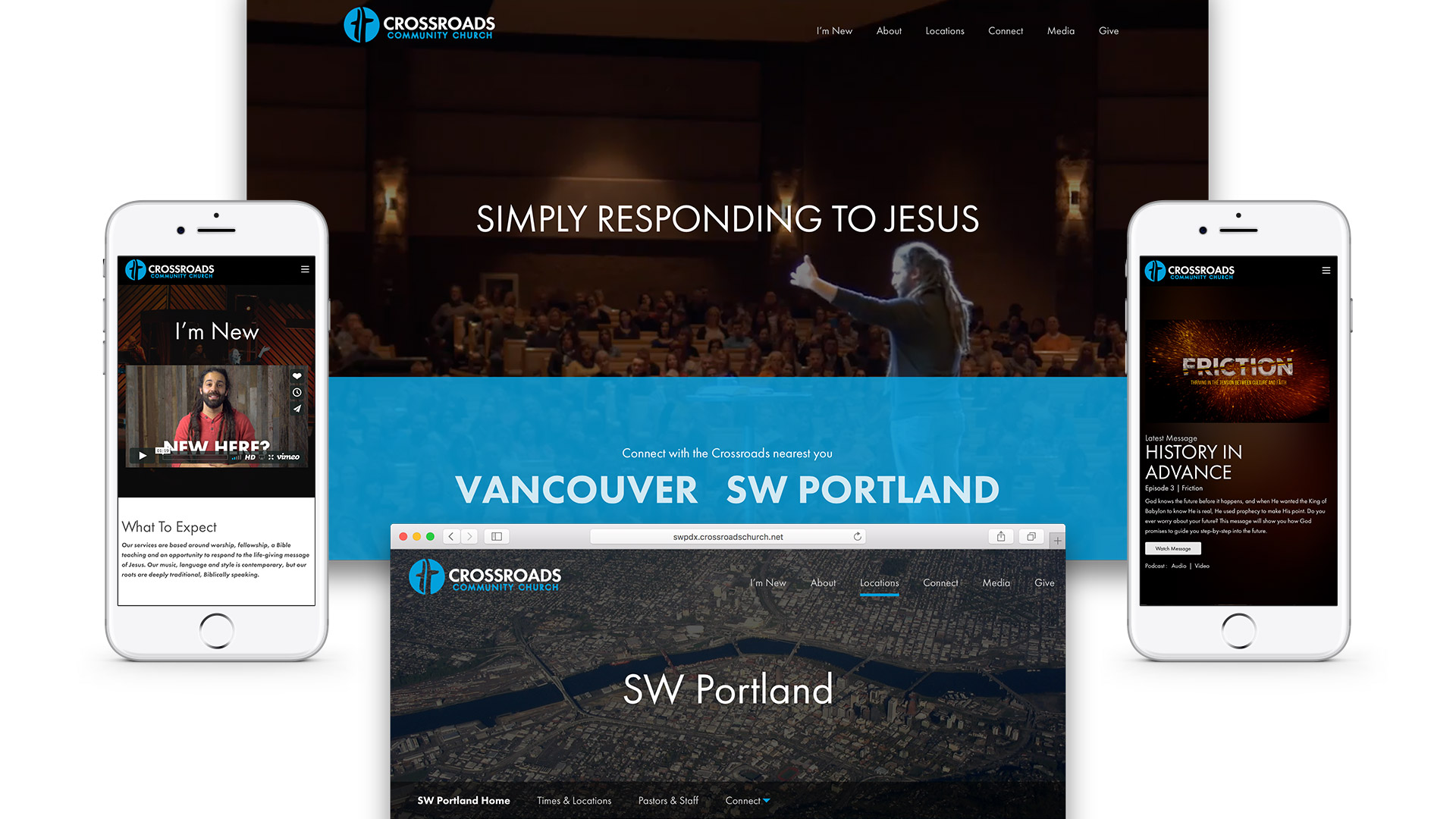 More than just re-designing and re-developing we got to re-define how Crossroads Community Church should use the web. Hopefully the work will help their congregation stay connected while reaching new guests who finds themselves at literal or philosophical crossroads.

Back to the goods

Follow us and be current with our work, adventures, meet-ups and other such foolery.